NTT Urban Development Co., Ltd., Daibiru Corporation, and Kajima Construction Co., Ltd. held a press conference in Tokyo on April 20, and built two buildings under construction in front of Akihabara Station from last year. Announced that the official name of the main project has been decided to be “Akihabara Crossfield”.

【concept】
The concept is “a hub base for shifting to a” city of creation, production and consumption.
In this city of Akihabara, which is widely known in the world as a city of home appliances and a city of personal computers and has immeasurable potential, people from various fields and information on various fields are available. By gathering and interacting (crossing), we will create next-generation new businesses that utilize IT. That was the concept of “Akihabara Crossfield”.
The themes are people exchange, information exchange, and industry exchange.
In order to actively engage in such various exchanges, a new platform was constructed by integrating industry-government-academia collaboration functions, customer attraction functions, information network functions, office functions, etc. in the lower floors of the two buildings, Akihabara Daibiru and Akihabara UDX.
In addition, the arteries of Tokyo (Yamanote Line and Sobu Line) intersect, and in the fall of 2005, the Tsukuba Express opened, and a research institute where universities and research institutes conducting high-level education and research are concentrated. The city Tsukuba and Akihabara were connected in 45 minutes, and the logo and name were decided with the meaning of “crossing”. 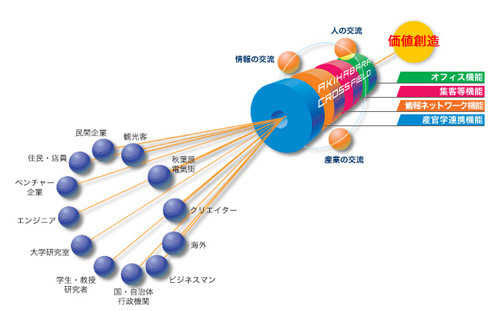 【Land readjustment overview】
Of the two buildings, the one on the station side is Akihabara Daibiru, which has 31 floors above ground and 2 floors below ground, and the other is 22 floors above ground and 3 floors below ground, Akihabara UDX. Akihabara Daibiru was completed in March 2005, and Akihabara UDX was completed in January 2006.
In addition to the JR Yamanote Line that connects the city center, Akihabara is connected to the Keihin Tohoku Line, Sobu Line, Tokyo Metro Hibiya Line, and Ginza Line (Suehirocho Station). Furthermore, in the fall of 2005, the Tsukuba Express opened, connecting Tsukuba and Akihabara, a research school city where universities and research institutes conducting high-level education and research are concentrated, in 45 minutes.
The area around Akihabara Station will consist of offices, industry-government-academia collaboration functions, convention halls, etc. in the spring of 2005, starting with the completion of the Kanda Fire Station and a 40-story high-rise apartment building in 2004 based on the Tokyo Concept 2000 and Akihabara Town Development Guidelines. “Akihabara Daibiru” is completed. The Tsukuba Express Akihabara Station opened in the fall of 2005, and the “Akihabara UDX” was completed in January 2006.

Redevelopment in front of the station

The Akihabara department store closed at the end of 2006. Opened in November 1951, it ended with a long history of 1955. The part inside the station building was closed on December 31, 2006, but the Akiba Select Building in the East-West Free Passage has continued to operate since then.
History of Akihabara Continued to Chapter 8＞＞